Why You’re Not Making Money With Your Music 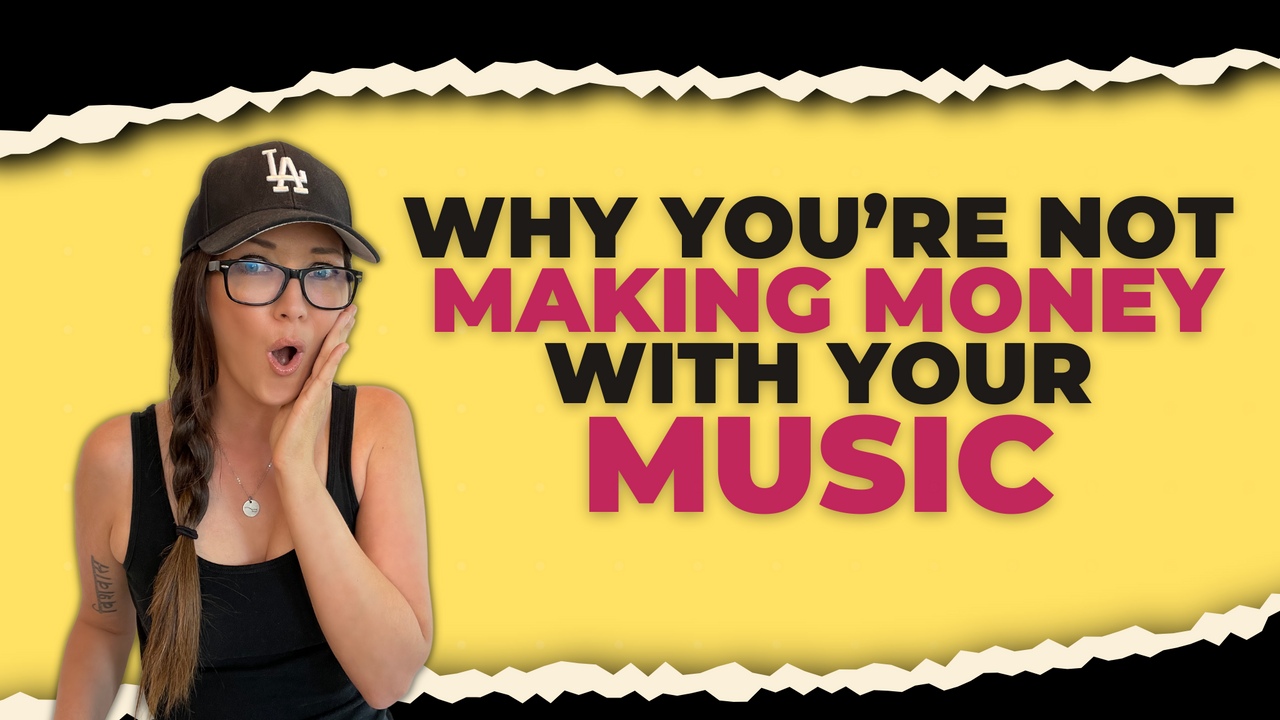 Don’t worry, I’ve been in your exact shoes, and it’s not your fault.

There’s a mainstream “story” that’s been fed to us for years that paints the picture of the starving artist who works a crap job and suffers for their art until some Record Label big wig comes to the rescue, funds their entire career, and makes them a star.

We’ve been indoctrinated to believe that some gatekeeper is going to let us into the cool kids club, give us some sort of “deal”, and that’s when we'll finally “make it”.

Even when you go to music school, while you might get an amazing education teaching you theoretical principles, they fail to teach you how to actually make money as a musician.

So, it’s no wonder there are so many artists starving for their art.

All we’ve been taught is how to make the art, not how to sell it.

So let’s talk about 3 reasons you’re not making money as a musician yet.

Unfortunately, there's no other way to say it;

It was built at a time when no one had any idea how to properly compensate musicians because streaming was so new and the industry didn’t know what to expect.

Think about that, that's nearly five football stadiums worth of people who have to spin your track in order for you to earn a thousand bucks!

"Well, that may be the case for streaming but getting a number one at radio still pays a lot of money."

And you're not wrong, but I'd also encourage you to really break down what it takes to get a chart-topping song on the radio.

Nashville, for example, is often described as a "10-year town" where artists spend a decade making next to nothing before seeing any type of success - and even then, nothing is guaranteed.

So, while you can still make a few hundred thousand dollars from finally getting a hit, when you break down how many years you worked for free to get there, it doesn't always end up being such a great payday after all.

Now don’t get me wrong.

I'm not saying you shouldn't be pursuing your goals of being a chart-topping artist, not at all!  I'm only saying there's a better way to support yourself as a musician while you chase that goal. 💪

For a long time, bar gigs were my bread and butter, and I was often playing every weekend and then some to fund my career. On paper, I thought it was a pretty good deal, getting a few hundred bucks to sing for a couple of hours, plus there was always the motivation of “you’ll never know who might be in the crowd.”

And again, I had a lot of fun for a long time playing those gigs, but much like with the #1 single, I wasn’t really doing the math.

Once I started factoring in the drive time, (often an hour + on either side), paying for food, paying for gas, paying to park, loading in, loading out…

When I added it all up, I was, more often than not, making just over minimum wage.

And if you love performing, I hear you, and there’s a ton of value in being on the stage, but if you really want to start scaling your income and moving into the 6-figure musician lifestyle, the fact is, it will be very challenging to hit that goal running the bar gig circuit. That system is simply not built for that type of growth

Diversifying your income streams is something I wish I had learned much earlier in my career.

Because relying on a big break is a tricky way to scale your career. And again, if you feel like you fall into that way of thinking from time to time, it’s not your fault.

You can’t throw a rock in this industry without hitting someone who’s trying to sell you on the idea that one sync placement can solve all your problems, or that you can build up a profitable fan base in a weekend.

The truth is, these things take time to accomplish and while they can be a lucrative income stream, relying solely on “one thing” to change everything for you isn’t a very savvy business move.

That’d kinda be like quitting your day job to exclusively play the lottery.

This was a big mindset gap that I needed to bridge. For a lonnggggggg time the thought of selling my services or promoting my music made my skin crawl. 😖

But I learned something in recent years that really shifted my perspective.

If you truly have a skill or a service that can genuinely provide value to someone else, then the reality is, it is unethical to NOT sell it to them.

Sales is simply the act of distributing your service and if you think that you shouldn’t be compensated for your skills then I promise you, you are not properly evaluating how much you have to offer. 😉

Pivoting the way you look at selling your skills within the marketplace can change everything.

Reason #5- You’re not being persistent

Have you ever tried to learn something and after 30 minutes you deem it impossible and never return to it again?

And in the music industry there’s no denying that it takes more than a couple of alan keys to get the job done.

I think what a lot of artists struggle with is the unknown.

Since there’s no set framework for success it can be very hard to stay on the grind for an indefinite amount of time. (Trust me, I feel ya on this one)

But I promise you, no results are going to come if you give you up. Success often takes longer than we’d like, but if you hang in there I can assure you you will reap the rewards.

If any of these made you feel seen 👀, don’t worry, we’ve all been there - myself included!  And like I said earlier, it’s not your fault!

Did you know that most musicians actually pay to fund their career?  Yet, only a very small percentage actually make money from their music!

At Produce Like A Boss we are on a mission to change this.

That’s why I’m SO excited to announce we have opened the doors to our mentorship program “Home Studio Boss VIP” where you can not only get access to the course that will show you how to become a 6-figure producer, but you’ll also get a chance to work with me, and our amazing team of coaches to get 1:1 accountability.

If you're interested in applying, go ahead and book your call at the button below: