If You Set The Intention The Path Will Unfold 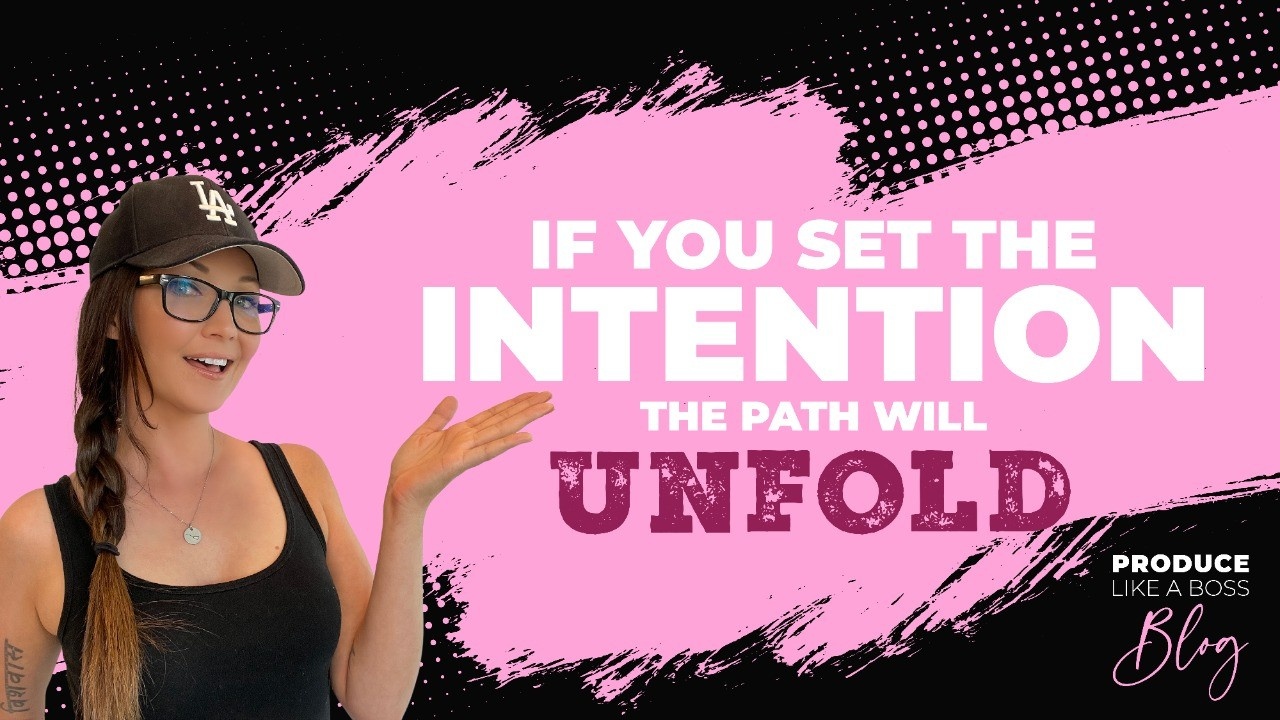 Have you ever caught yourself ‘white-knuckling’ your way through life trying to make things happen a certain way? Don’t worry, we’ve all been there, especially in the music biz. I used to think the only way for me to ‘make it’ was to get a major pub deal or record deal & if I wasn’t “Beyonce Big” then I had failed. Boy was I wrong! Do you know how much money is floating around for creatives to make money outside of the “music industry?”

The truth is, I just wanted to make a great living with my music & I wanted to make an impact. Once I realized that I didn’t need to define the how or what was going to get me there, I discovered a whole new world. That world was music production & custom songwriting! What started off as a necessity because I couldn’t afford to hire producers soon became an obsession & a passion!

Learning how to produce opened doors I could have never imagined, it created opportunities I could have only dreamed of. I just think to myself now, imagine if I would have INSISTED that a “record deal” or “pub deal” would be my ONLY path to success. CRAZY!

We’ve all heard the saying, “you make plans & God laughs,” I imagine him saying something like “those are your dreams?! That’s cute kid….hold my beer.”

Once I began to learn how to produce, here’s just a few things from the path that followed:

Now I’m helping other artists & songwriters learn how to produce & record so they can do the same!

In this blog I’ll tell you a little bit more about my back story, what prompted my decision to go full time with my music, & how learning to produce has changed my life.

P.S. If you're interested in learning to produce your own music, check out this FREE training

I’ll never forget the day I set the intention to go full time with my music, I was bartending one night at a club in Downtown LA. This wasn’t your typical fancy pants night club, it was a dingy, dirty, high volume bar with a lot of RIFF RAFF. I ended up having to cut a guy off for being a drunk D!CK & him & his girlfriend threw their pint glasses at me. The glasses crashed behind the bar nearly avoiding my face & I had this coming to Jesus moment of, “what the F* am I doing with my life?” Why am I working a job that doesn’t support what I really want to do & also putting myself at risk?!

I actually had a roadtrip to Oregon from California not too shortly after & that gave me a lot of time to think & marinate on what my game plan was because I knew I was NOT going back to that job. I knew I wanted to make money with my music, I just didn’t know how. I was green, I didn’t know the industry, but I made a promise to myself during that drive that I WOULD make money with music & that I wouldn’t stop until I was successful. I definitely didn’t know I would become a producer! I just set my intention as “I’m a professional musician, I make a great living with music.” I never even wanted to be famous, I just wanted a career making a GOOD living in music.

There was something very powerful about that intention. Especially when I let go of the HOW.

Now that’s not to say I haven’t set goals, I certainly don’t think we can just manifest things by “thinking” them into existence (thank you “The Secret” for watering down the Law of Attraction.) I think it’s a combination of setting intention & then LETTING GO of the HOW because I truly believe the path does unfold. You just have to open yourself up to possibility.

Here’s an example, one of my goals was to get a major record or pub deal & to be signed in Nashville. I think the main reason for that was me holding onto the general narrative that you’ve only ‘made it’ once you’ve become a household name or once you’re on the radio. So naturally I thought I should chase the same dream that everybody else was chasing, right?! Can you see how tunnel visioned that is?  That was me trying to control the HOW. Do you know how much money is floating around for creatives to make money outside of the “music industry?”

So here I am several years ago, in Nashville, pitching my songs for opportunities as a songwriter both in film/tv & to other artists to get placements & also wanting to release music myself as an artist. After spending $500-$3000 per recording I realized my bank account just couldn’t keep up with how many songs I was writing!

So honestly, learning how to produce kind of began out of necessity before it turned into a passion. Not only could I not afford to keep hiring producers or “track guys,” I was finding that certain opportunities in Film/TV especially required me to be able to crank out edits & FAST! I would then have to be at the mercy of the producer’s schedule & waiting on things like stems & alt mixes. Oftentimes I’d miss a deadline & that opportunity would bomb. Learning how to produce was a huge leap of faith for me because I was NOT tech savvy, I was broke, & frankly I didn’t want to take away from working on the craft of songwriting because I didn’t want to spread myself too thin.

We’ve all heard the saying a jack of all trades is a master of none, and that’s what some people told me when I mentioned learning how to produce.  I’d get “you’ll never be able to do that” or “it’s too complicated'' or “why don’t you just stick to what you’re good at?” I even had an ex-boyfriend tell me “Why do you always have to pick jobs that are made for MEN?”

Funny thing is, did you know the entire quote actually reads “A jack of all trades is a master of none, but oftentimes better than a master of one.” Crazy right!? To think of how long that quote has been floating around to smack people in the face that are specialized in many areas.

LISTEN UP-- If you’ve zoned out come back to me! Do NOT feel bad if you are multi-passionate & want to explore more ways to express your creativity!! You are not just a singer or just a songwriter, you are a creative!! Modern technology has made it so much easier for us to express our vision without having to be an engineer or spend tens of thousands of dollars on recording school.

Back to my story, learning how to produce wasn’t a swiss picnic for me. I had doubters, heck, I doubted myself. I didn’t know computers well & had no money to buy gear. It felt like the odds were stacked against me, but I was so determined & I stuck with it. I got some used gear. I let go of relationships that were no longer serving me & my GROWTH (bye bye JERK ex-boyfriend) & I got to WORK!

Learning how to produce opened doors I could have never imagined. Had I known the POWER of learning this skill I would have tried learning it SO MUCH SOONER. Could you imagine If I had held onto my tunnel vision of “I need a major deal or hit song” to be successful?! I would have missed out on the incredible opportunities that unfolded along the way. I’ve produced & sang on everything from jingles, to commercials, to artist singles, to theme songs for corporations, kids songs for plays, to custom songs for loved ones, & I’ve had a blast doing it all from the comfort of my home studio.

That’s just a snippet of my story, but I really wanted to share with you in hopes that you will expand your vision & not limit yourself to what the “industry” might call success. I think making money DOING WHAT YOU LOVE while SERVING OTHERS is the greatest gift we can give the world & ourselves. I think to produce like a boss means to produce music, to produce results, to produce opportunities, & to produce revenue, meaning income.

Now, if you’re ready to learn how to produce and record yourself, even if you’re not tech savvy & even if you don’t have fancy gear, I have good news!

I have a free training called “Start Producing Your Song Today in 3 S.I.M.P.L.E Steps!” where I share a BUNCH of tips & tricks to start recording your song TODAY. Go ahead & visit www.producelikeaboss.com/startnow

I hope you got a lot of value out of this.